For physical-chemical water treatment, a combination of purification technologies will be applied.

The process consists of multiple steps connected in series. Each process step has its own specific function. Physical-chemical purification will primarily be applied for treatment of wastewater that cannot be purified biologically. The treatment is focused in particular on the removal of suspended substances, oil, soaps and dissolved inorganic substances such as heavy metals and toxic components. Installations for detoxification, neutralization and dewatering (ONO installations) will often be applied in industry and are a typical example of physical-chemical purification.

RWB has recently developed and applied a new technology. This is an economical, compact and efficient alternative for the traditional purification methods. With the help of cross-flow ceramic membrane filtration, previously separated and treated waste streams with soap, oil and heavy metals can now be treated together, instead of in 2 or 3 separate installations.

In general, one or more of the following process steps will be applied in series for a physical-chemical purification:

Pre-filtration will be applied to remove coarse undissolved contaminant components and suspended substances from the raw water. Some examples are grates, sieves, sand or multimedia filters and self-cleaning filters. The pre-filtration will often be applied for the protection of pumps and the prevention of clogging and wear.

Oil- and soap-containing waste streams will in general be kept separate from metal-containing streams because oil and soap often hinders the removal of metals. If the water contains oil, this can be removed by means of a combination of techniques. Dissolved oil cannot be removed with these techniques. Emulsified oil can be brought out of emulsion by means of chemicals. Then the oil can be driven upwards so that they can be scraped from the top of the fluid. The upward flow can be significantly improved and accelerated by flotation: very fine air bubbles are introduced into the water, to which the oil particles attach, moving upwards more quickly.

Soap-containing water will also not be mixed with metal-containing water, because the soaps hinder the removal of metal. The soap can be bound easily to an activated carbon filter. For large amounts of soap, a regenerable ‘surfactants filter’ is used.

Most metals, such as iron, nickel, zinc, copper and chrome form insoluble bonds, oxides or hydroxides, when the degree of acidity of the water is increased to a certain value. The substance leaving solution is called precipitation or deposit formation. Very small – called colloidal – metal particles are created in the fluid.

The coagulation process destabilizes colloidal particles. Because the individual particles have an equal charge, the particles repel each other and are stably present in the water. The charge of the colloidal particles in a watery solution is in general negative. With the addition of a coagulant with an opposing positive charge, the particles come together and form micro flocs. The coagulant is quickly and powerfully mixed in so that it is distributed evenly in the water. Familiar coagulants are iron (III) chloride and aluminium chloride.

Flocculation is the growing together of the micro flocs that are formed into flocs with a size and density such that they can be separated from the water. The flocculation process in principle goes through two phases. In the first phase, there is rapid mixing; in the second phase, large flocs are formed and will be slowly mixed. Often, a flocculation medium will be added to promote the flocculation process. Familiar flocculation agents are polyelectrolytes (PE) and inorganic polymers like activated pebbles.

Depending on the properties of the flocs formed, these will be removed through sedimentation or flotation.

With sedimentation, the flocs sink on the basis of gravity. Sedimentation takes place in a settler. There are many types of these, simple vertical tanks and more complex ones such as lamellae separators. The flow speed in the sedimentation tank will be chosen to be lower than the settling speed of the flocs. In the bottom of the settler, a layer of sludge forms that is regularly pumped away or discharged.

If flocs are formed that do not settle well, then flotation will be applied. The separation will be realized by introducing microscopic air bubbles into the water. Substances such as oils and fats can also be removed from the water through attachment to the rising gas bubbles that are introduced. Through attachment of the solid substances to the gas bubbles, the density relative to the water is lowered significantly, and they rise. Solid substances with a density that is comparable to that of water can thus be removed. For the introduction of the flotation air, there are different options: air diffusion, electro-flotation, vacuum flotation or pressure flotation. A drifting layer forms on the surface that will be scraped off regularly.

Depending on the established discharge requirements, the effluent from the sedimentation tank or flotation unit can be further treated. Technologies like sand filtration and ion exchange, or a combination of these, can be applied for this.

Sludge that is produced often has to be further desiccated. For sludge dewatering, different technologies can be applied. For ONO installations use is often made of a chamber filter press. With this, the watery sludge is pressed through a cloth, so that it remains in a chamber. By doing this under pressure, the sludge becomes desiccated in the chambers.

A centrifuge is also often used. This separates sludge and water with the help of centrifugal force.

RWB has very extensive knowledge and experience in the area of physical-chemical purification. Next to theoretical knowledge, a great deal of knowledge has also been gathered in practice.

RWB can also conduct pilot tests and lab experiments in order to come up with an optimal process design.

Check out all customer cases 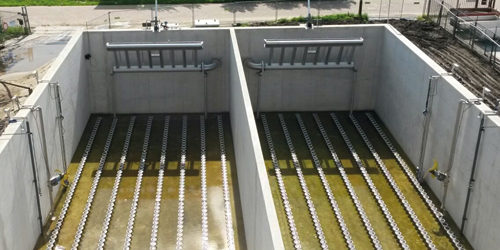 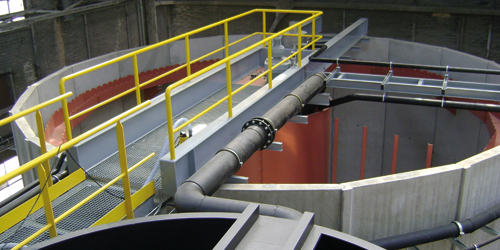 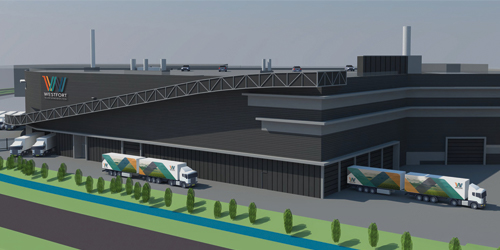